Gynecomastia surgery is a common procedure sought after by male patients in NYC. Gynecomastia is the presence of small to excessive breast enlargement and breast feminization in men. The condition can be classified into four grades:

Gynecomastia classification systems factor into the specific treatment algorithm needed to address the condition. In general, gynecomastia is very common and we’ve found that it often comes as a surprise to patients that most forms of gynecomastia can be treated with liposuction, alone.

The Psychological Toll of Gynecomastia

Aside from the physical symptoms of gynecomastia, the emotional and psychological can have a big impact on patients, as well. The psychological burden and impact on emotional growth is well documented. Recently, a large research project was undertaken on this and results were compared to those of a group of boys without breast enlargement. Sixty-two percent of the gynecomastia patients had mild to moderate breast enlargement. As in previous studies, many of the boys with gynecomastia were overweight or obese: 64 percent, compared to 41 percent of the comparison group. Patients with gynecomastia had lower scores on a standard quality of life assessment, indicating problems in several areas. Even after adjustment for weight and body mass index (BMI), the patients had lower scores for general health, social functioning and mental health. They also had lower scores for physical health, but this was attributed to being overweight.

Breast enlargement was also associated with lower scores for self-esteem. This, along with impairment in emotional areas of quality of life, appeared directly related to gynecomastia, rather than being overweight. Luckily prompt treatment and gynecomastia surgery can dramatically increases the quality of life for these patients.

Gynecomastia can be caused by medications and medical conditions. Once these causes have been ruled out for a patient, the mainstay of treatment is gynecomastia surgery and liposuction.

Our goal for male breast reduction surgery is to contour the chest in order to improve shape, appearance and thus self esteem. To achieve this, we primarily use a combination of Vaser liposuction and plasma skin tightening for gynecomastia removal. We have found this combination achieves the most predictable results with minimal downtime and virtually no scarring.

Historically, traditional liposuction has been used to remove excess unwanted fat in the chest. Next, an incision was made to remove the extra breast tissue and or skin. These operations were successful in reducing fat, gland, and skin, however there was significant scarring. As a result many men were left unhappy because they had an excellent shape and contour while in clothing but were uncomfortable taking their shirt off due to the chest scars.

Vaser liposuction addresses these issues and over hundreds of ultrasound-assisted male chest liposuctions, we have found that Vaser yields the highest patient satisfaction rates.

The first step in the Vaser procedure is anesthesia. The procedure can be done under general anesthesia or with light sedation. Next, the small Vaser liposuction probe is introduced through a tiny incision which will also later be used for fat and gland removal. Ultrasound liposuction offers a few advantages over traditional liposuction. It is particularly efficient in the removal of the dense, fibrous male breast tissue while at the same time contributing to skin retraction. Outside of patients who have lost a lot of weight (usually over 75 lbs), most males will have excellent collagen in their skin and therefore will respond well to ultrasound liposuction with minimal scarring. 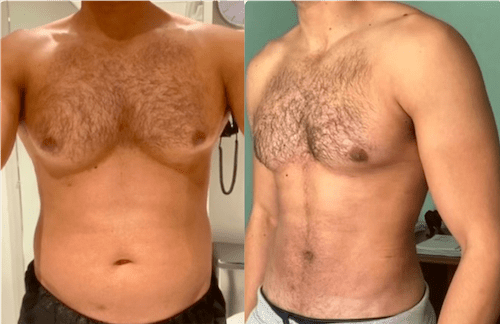 The pull-through technique is an excellent addition to liposuction for gynecomastia in the male patient. Basically, “the pull-through” technique is using some sort of small plastic surgery instrument to remove extra gland tissue that was not removed with liposuction through the liposuction incision. This works very well for many patients and we have some great instruments that allow us to do this procedure.

Many men will have some extra loose skin from gynecomastia or pseudo gynecomastia, which is excess male breast tissue that is fat, and not extra gland. Our practice has recently begun adding ionized helium gas or plasma to our liposuction platform. This device goes through the same small incision that was used for Vaser liposuction and the pull through technique but adds skin tightening capability. The ionized helium is able to add a significant amount of heat to the bottom of the skin to cause the collagen to tighten and remodel during the liposuction procedure. This can dramatically improve the results of the procedure and has been an excellent addition to the liposuction treatment of gynecomastia.

This is still a great method of treating gynecomastia and along with liposuction is the most common treatment for gynecomastia. Many surgeons who do not use energy devices in their liposuction practice will typically perform traditional non-energy based male chest liposuction along with direct excision. Direct gland excision for gynecomastia is making an incision in the areola from the 3 pm to 9pm of you think of the areola as a clock. This allows the surgeon to flip the areola open just like lifting a man hole on the street. Excess breast tissue or gynecomastia can be directly removed because the surgeon can directly visualize the gland. The downsides to direct excision to me are 1) the scar- typically it heals well but there is a psychological burden for men to have a scar on their chest and it does not always heal perfectly 2) The chance of a contour deformity- if too much gland is removed from just under the areola a divot or depression can develop. Body builders are a unique group of patients who seek treatment for gynecomastia or excess male breast tissue. Given that they typically have very little body fat and they frequently have gynecomastia because of anabolic steroid use I will will typically do a direct gland excision only as to remove all extra gland which is the only concern and reduce the chance any more tissue will grow if they take another cycle of anabolic steroids.

Skin removal along with liposuction and complete gland removal is an option that is all about trade offs. We all have extra skin and typically most men are willing to tolerate some extra skin instead of having large scars that are noticeable on the chest. For patients considering this option our approach is usually to maximize Vaser and plasma liposuction with the pull through technique and wait 6 months. From there, if the patient hates the extra skin that remains, we can add a skin removal procedure in the office and the psychological burden of the scar is much less than if it had been done at the beginning of treatment. If a patient is a massive weight loss patient or has been “yo-yo” dieting for several years and has a lot of extra skin, we will discuss removing the nipple cutting out all the extra skin/fat/gland associated with the gynecomastia and putting the nipple back down as a graft. This can be a great procedure in the proper patient when they’re fully informed of the risks, benefits, and associated risks.

What Causes Gynecomastia in Men

Gynecomastia can be caused by natural causes, medications or medical conditions.

How Long is Gynecomastia Recovery?

We ask patients to take 2 days off of work but they will be able to work at home the day after surgery using a lap top and taking calls on the phone if they wish. Dr. Neinstein requests no exercise for 3 weeks to allow the small blood vessels to heal so there is no significant bruising after surgery. Most patients take pain medication for 24-48 hours than switch to ibuprofen or extra strength Tylenol.

All men have breast tissue and it is completely normal. However, there are three times in a man’s life when they may have more breast tissue than normal.

Medications that Cause Gynecomastia

Gynecomastia is not always idiopathic. Sometimes excess breast tissue is caused by disease states and even medications.

The most common cause besides idiopathic that we see is a consequence of anabolic steroid use. Many men have used and will continue to cycle through anabolic steroids in effort to assist in weight training to help add muscle bulk or speed recovery. One of the consequences of using anabolic steroids is the increase in growth in male breast tissue or gynecomastia. There are some unique aspects of this. Typically these patients have very little body fat, as they are bodybuilders or gym enthusiasts. In these patients we typically simply remove the gland through a small incision since there is almost no excess fat or skin to remove. Unlike other medications that cause gynecomastia, the excess male breast tissue tends not to go away once the anabolic steroids are stopped. We find its important to remove the entire portion of the gland in these patients because if they continue steroid use there will be a recurrence or a re-growth of the male breast tissue or gynecomastia.

Medical Conditions that Cause Gynecomastia

Any time there is an imbalance between estrogen and testosterone production where there is an increase in estrogen, gynecomastia will develop. These situations are rare but it is very important for your examining surgeon to rule all of these out as some can be life threatening.

The pituitary gland or other glands in the body can develop tumors that can be benign or malignant. These tumors may produce estrogen. Many times these patients will develop other feminizing features along with excess male breast tissue. A thorough work up with blood work, imaging and prompt appropriate referrals is essential. Disease states within the liver or kidney can also cause a production of estrogen through creation of enzymes that help build estrogen. These situations will also cause an increase in gynecomastia. It is not just medical conditions that cause extra estrogen, but also medical conditions that cause a decrease in testosterone and thereby increase male breast tissue. If there has been any trauma, infection or disease of the testosterone producing testicles this can lead to gynecomastia as well. Again, your surgeon will ask you about these and perform a physical examination as needed.

The typical cost for gynecomastia surgery near New York, New York is about $10,000. For more details regarding liposuction surgery costs, please visit our cost page.

If you are interested in gynecomastia surgery in NYC and have any additional questions, please contact Neinstein Plastic Surgery at 212.249.0949. We are eager to help, and look forward to hearing from you

Previous
Next
See All Before & Afters

Schedule a consultation
Scroll to Top