When liposuction was first invented, procedures were performed in a hospital and these procedures often required lengthy hospital stays and even blood transfusions.
However, with time, the technology and techniques used in liposuction surgery have evolved to enable surgeons to do things safer, better, faster, and easier. Tumescent liposuction is the culmination of many of these advances.

About 1 hour before tumescent liposuction, patients are given medication by mouth, which allows them to be gently sedated and feel as though they have had a few drinks. Patients are breathing on their own, walking, talking, and have no breathing tube whatsoever.

From there, patients are guided into our fully-accredited operating room which has the same safety standards as a hospital operating room. It’s important to note that even though tumescent liposuction procedures are minimally invasive, Neinstein Plastic Surgery still takes every single precaution that would be taken should the operation be a heart transplant.

We next place numbing fluid under the patient’s skin and into the fat – this is what differentiates tumescent minimally invasive liposuction from traditional liposuction. We use dilutes amount of numbing medication called lidocaine that you may have had at the dentist in our numbing solution. This medication is weight based, meaning the amount we can administer depends upon your weight.

By performing tumescent liposuction in this sequence, patients recover immediately and are able to put on their garment and walk out of the office. This approach also enables patients to avoid the drowsiness, nausea and vomiting that can when general anesthesia is administered.

Am I a Candidate for Minimally Invasive Tumescent Liposuction?

Candidates for minimally invasive tumescent liposuction are typically individuals seeking treatment in only a few areas, such as:

When performing tumescent liposuction we will usually treat two areas or three small areas. If patients would like more areas treated, we are unable to get them as numb as we would like while awake, so we must change to IV anesthesia with a board certified anesthesiologist.

After the areas are numb we use ultrasound energy to melt the deep fat. This melted fat can be removed with very small liposuction instruments instead of the traditional large instruments. This means smaller incisions (virtually scarless), less pain, less inflammation, less downtime. We also can use plasma energy through the same incision to tighten the skin

Tumescent Liposuction Before & After 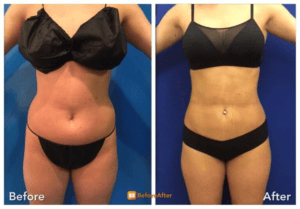 Neinstein Plastic Surgery is committed to helping each and every patient achieve the body they deserve. Learn more about what liposuction costs or contact us  today to book your consultation with a tumescent liposuction specialist.